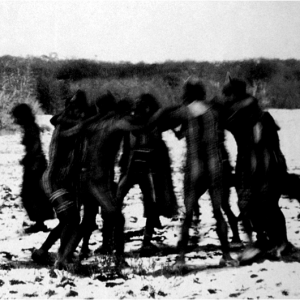 For the Nederlands Studenten Kamerkoor I wrote the composition Antes del Hain, based on a libretto by the Chilean poet Nicolás Eduardo Barría González. In the work, Nicolás and I explored the mysterious matriarchal ancestors through an investigation into the most important ritual of the Selk’nam: the Hain. It is a composition that reflects the magic from the mythology of the Selk’nam, and of a non-patriarchal humanity.

The Selk’nam wwereas one of the last indigenous people from South America, who came into contact with Europeans in the late nineteenth century. Soon after, the same Europeans were able to make the Selk’nam disappear within a few centuries through illness and murder.

The Hain was a ceremony full of symbolism and mythology and was therefore essential within the traditions of the peoples. Central to that mythology was the contact with nature gods and a mythical battle, which also symbolized the struggle with the self.

The work was premiered in February and March 2018, together with 11 other pieces, performed by the Nederlands Studenten Kamerkoor and harp player Annoes van der Zande, conducted by the Belgian conductor Kurt Bikkembergs. The theme of the project was War and Peace, inspired by the work of the same name by Lev Nikolaevich Tolstoy.