Artistic director (together with Jonathan Ploeg) 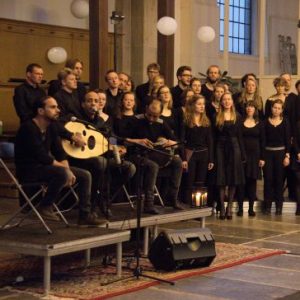 Chamber choir JIP was founded in 2013, and has grown over the past three years under the artistic leadership of my brother Jonathan and me. Twice a year, a challenging and original a capella program is compiled around socially relevant themes. The programs are often daring and bold. Singers are expected to prepare for the rehearsals at home, and work on singing technique, stage presence, improvisation, and team-building during rehearsals, thus creating a choir with a unique and high quality sound.

JIP6 | Op Doortocht… Moving cultures | spring 2016
Inspired by all the news of the refugee crisis in 2015, we chose to dive into the theme “Op Doortocht – moving cultures”. There are many nomadic tribes that choose to travel and are always on the move. In our modern society, people travel in many different ways and for many different reasons. In the concerts, the audience could immerse themselves into many different kinds of stories from all over the world: Inuit pictures, Maasai sounds, Middle Eastern poems, and Andalucían gypsy tunes.
In a troubled and rapidly changing society, it is important to work on awareness of what is happening in the world. Such awareness can be raised through the media, but during JIP6 we investigated the direct authentic sound of traveling peoples from all over the world. And that has a completely different impact. There was music from Syria, music from the Masai, Inuit sounds, gypsy music and more.
We performed three world premières – specially written for JIP – by young composers. Most of the other pieces we sang had never been performed in the Netherlands before. The great musicians Mohammed, Ibrahim, and Ali were an Arabic vibe to the evening. Besides the music, there was spoken poetry by from international artists and visual arts from various artists all over the world.